Wondering why New Jersey's economy and working families can't seem to recover from the recession?

This graphic should shed some light on that question as well as this accompanying article from the Star-Ledger. 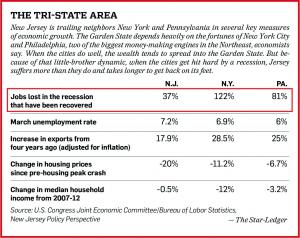 If we want a robust economic recovery, we need to focus on JOBS. It is nothing short of a catastrophic failure that New Jersey has only recovered 37% of the jobs lost during the Great Recession. For a comparison, New York and Pennsylvania have recovered 122% and 81% of their jobs respectively.

It's time to throw away the flawed economic playbook from the last five years, which has squandered billions of dollars on corporate welfare and produced one of the worst job growth rates in the nation. Instead we need to focus on real solutions for creating jobs, such as investing in our state's families, education system, and transportation infrastructure just to name a few things.

Handing out taxpayer dollars to corporations and expecting that to solve our jobs crisis is ineffective and irresponsible. We need our elected officials to use our tax dollars to do what is best for the economy. Right now that would be investing to create jobs.

We look forward to working with all of our coalition partners to make sure that message is getting through to policy makers. It is time to get our state on the right track once and for all.