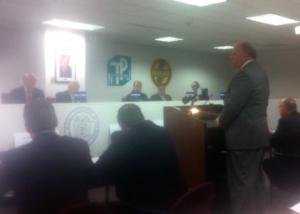 Working Families United for New Jersey, Inc. is dedicated to uplifting our state’s working families by standing up for decent jobs which provide a middle class standard of living and strengthen our communities. That is why WFUNJ Executive Director Edward Correa testified at today’s NJ Turnpike Commissioners meeting to oppose privatization of hundreds of jobs on the NJ Turnpike and Garden State Parkway. We were proud to stand up for good jobs alongside Senate President Stephen Sweeney, Senate Majority Leader Loretta Weinberg, our labor and community partners, the New Jersey State AFL-CIO, and IFPTE, the union which represents workers on the Turnpike and Parkway.

A corporate takeover of these jobs would be a recipe for disaster for workers and local communities. Not only would private management reduce transparency and accountability to New Jersey communities, but the cost-savings which companies are promising are no more than a sham based on slashing workers’ salaries and benefits. These reductions would be on top of a 30% or approximately $16,000 pay cut workers already took to try and save their jobs.

This race to the bottom approach is neither favorable to workers nor the community, and would primarily benefit the company in the form of higher profits. Ultimately, this privatization scheme is no more than a transfer of wealth from workers to a private company and an elimination of accountability to the community, taxpayers, and motorists. A public asset which is owned by and meant for the people of our state should not be given to private hands which places profit ahead of the public interest.

Strong communities are based on a foundation of middle class jobs, and that is exactly what our coalition is fighting for by opposing Turnpike privatization. Remember that you can join us in the fight against privatization by clicking HERE to forward a message to the Turnpike Commissioner. Thank you for your continued support of good middle class jobs.