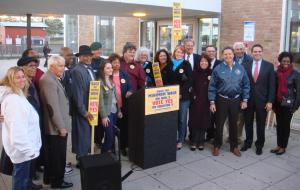 Winning approval of Ballot Question #2 to raise New Jersey’s minimum wage depends on achieving a maximum voter turnout on November 5th. The vast majority of us realize that $7.25 per hour doesn’t cut it in our state. If you do the math, there simply is no way to pay for rent, utilities, child care, transportation, insurance, and health care – even if you have two or three minimum wage jobs. We all know that our state must do better.

Speakers made it clear that the New Jersey economy can afford to pay workers, who earn the least among us, $40 more per week. A dollar an hour raise would have an immediate and profound impact on families trying to make ends meet and provide a boost to local businesses which would benefit from increased consumer spending.

It was moving to hear from several minimum wage workers, who shared their stories, and educational to hear from Wider Opportunities for Women Senior Scholar Mary Gatta, who helped illustrate the difference that an increase in the minimum wage would make for workers struggling to pay the bills. Today’s program left no doubt that raising the minimum wage is the right thing to do for New Jersey’s hard working families as well as the economically sensible thing to do as we try to increase consumer spending in our recovering shore communities and bolster economic growth throughout the state.

This year is the 75th Anniversary of the nation’s first federal minimum wage, which was enacted through the Fair Labor Standards Act of 1938 and signed into law by President Franklin Roosevelt. This policy was critical to building the American middle class, and this year we have the opportunity to carry on this great tradition. By voting “Yes” on Ballot Question #2 on November 5th, we can ensure that even those workers, who make the least among us, can labor with dignity and have the opportunity to build a brighter future.