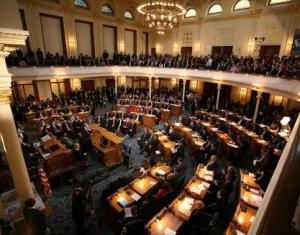 TRENTON – “Governor Christie’s budget speech presented a false perception for New Jersey’s working families when he indicated that a $2.25 billion payment into the pension system would detract from state spending on education, tax relief, transportation, and health care,” stated Working Families United for New Jersey, Inc. Chair Charles Hall, Jr. “The question remains that if the Governor is so committed to these initiatives, why has his record worked in complete contradiction to these goals? He cut $1 billion in education funding his first year in office; he cut property tax rebates and reduced the earned income tax credit, increasing the financial burden on thousands of middle class families; he cancelled the ARC Tunnel Project which would have revolutionized New Jersey’s transportation system and boosted jobs and economic growth; he cut funding for women’s health care services; and he recently allowed a $7.6 million federal grant to expire which could have helped to enroll New Jerseyans for health insurance.”

“Funding pensions is not a political choice, as the Governor would have us believe, but a matter of contractual obligation,” added Hall. “When it came to the choice of supporting the community, the Governor has made clear time and time again what his priorities were – whether it was awarding an unprecedented $2.3 billion in corporate tax breaks and subsidies, which failed to be the job creating engine Christie envisioned, or pushing for an income tax break that was both fiscally unrealistic, politically charged, and benefitted only the state’s wealthiest families.”

Working Families United for New Jersey, Inc. is a non-partisan 501(c)(4) statewide grassroots coalition, comprised of over 256 progressive, labor, religious, community, civil rights, student, women, and retirees groups, working together to build grassroots power and to educate and mobilize around the common issues that affect our state’s families.