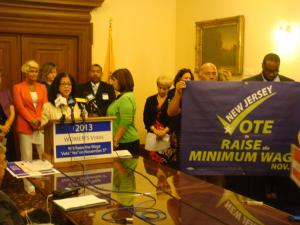 TRENTON – Dozens of women leaders from labor and community groups joined with state, county, and local elected officials at the State House today to support raising New Jersey’s minimum wage and to commemorate Women’s Equality Day – the day the 19th Amendment was certified, granting women the right to vote. Speakers explained how approving the minimum wage ballot question would advance the fight for women’s equality in New Jersey and help to close the opportunity gap for thousands of women in the state who struggle to make ends meet in minimum wage jobs. Out of all minimum wage workers in New Jersey, approximately 60% of them are women.

“New Jersey’s $7.25 minimum wage is not adequate to make ends meet. Approving the ballot question to raise New Jersey’s minimum wage and allow for an annual cost-of-living adjustment is the right thing to do for so many hardworking New Jerseyans,” said Senate President Stephen Sweeney.

“Every day in my city I see workers earning the minimum wage to support their families. Many of the workers are female and female heads of households. It’s incredibly important that New Jersey support the ballot question to raise New Jersey’s minimum wage. It provides an annual cost-of-living adjustment to keep pace with the increasing cost of basic necessities and is a step in the right direction,” said Camden City Mayor Dana Redd.

“Why is this necessary now?” said Laurel Brennan, Secretary-Treasurer of the New Jersey AFL-CIO. “Because low income families, single parents, and students have worked incredibly hard for too long and still earn less than a livable wage. An individual working a full time job at minimum wage barely earns $15,000 a year before taxes. The hard working citizens of the Garden State deserve a chance to earn their fair share.”

“It is immoral that we allow so many workers to live on $7.25 an hour. That is why I support raising New Jersey’s minimum wage. It will improve the economy because increased wages will be spent locally on groceries, clothes and other staples to improve the quality-of-life for those that earn the least among us in New Jersey,” said Senator Barbara Buono.

Working Families United for New Jersey, Inc. is a non-partisan statewide grassroots coalition committed to engaging the public in the democratic process and advancing progressive policies to promote social and economic justice for all New Jersey families. The coalition’s “Raise the Wage” campaign, which has 253 supporting organizations to date, is mobilizing and educating New Jersey voters on the importance of approving the minimum wage ballot question this November 5th which would raise New Jersey’s minimum wage from $7.25 to $8.25 per hour and include an annual cost of living adjustment.