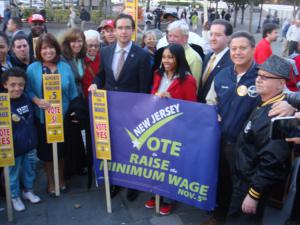 We thank Jersey City Mayor Steven Fulop, Hoboken Mayor Dawn Zimmer, and Bayonne Mayor Mark Smith as well as all elected officials, union members, and community partners who joined together at the Journal Square PATH Station to urge commuters and local residents to vote “Yes” on Ballot Question #2 this November 5th. Ballot Question #2 is a statewide referendum that if approved by voters, would raise the state minimum wage from $7.25 to $8.25 per hour and tie future adjustments to the cost of living.

There are approximately 429,000 workers in New Jersey who would be impacted by the minimum wage increase. For these workers, raising the minimum wage is more than an abstract policy question, it is a matter of survival – of having enough money to pay the rent, put food on the table, heat their home, and raise a healthy family.

During the press conference, speakers made it clear that the minimum wage increase would not only help lift low-wage families out of poverty, but would also benefit our economy as a whole. The fact is that working people are all in the same boat, and suppressing wages on those who make the least among us will have a negative impact on wages for all workers. Additionally, the current minimum wage is so low that workers with two and three jobs are still forced to rely on public assistance programs. Approval of Ballot Question #2 is a win-win scenario that would lift wage scales, boost consumer purchasing power, and spur greater economic activity in our communities.

We are grateful to the outpouring of support that was generated during today’s press conference and leafleting action. We ask that you help spread the word to your friends and family about the importance of voting “Yes” on Ballot Question #2 to raise the minimum wage on November 5th.